It goes without saying that the idea of travelling to North West Cameroon in the current socio-political climate was one that I was particularly nervous about, but in March 2019, on the advice of our partners MBOSCUDA and NOWEFOR, I travelled to Bamenda (the main city in the area). During my short visit I discovered just how wrong my assumptions could have been, and just how crucial the social cohesion work that our partners are doing is for people in this community. 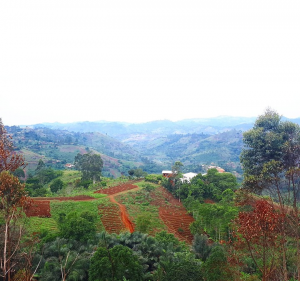 The North West is an area of outstanding natural beauty; there is luscious green country side with never ending sky lines, and views from mountain tops that are simply stunning. Located in the valley and surrounded by scenic hills, Bamenda itself is a very pleasant city with a suburban feel. I am not ashamed to say that I expected chaos; the top results of a quick internet search of Bamenda reveals the words “fear”, “tension” and “murder”. Official advice from the UK government is to avoid all travel to the region, which it classifies as a red zone. But once I arrived it was clear that life goes on despite socio-political unrest. Nearly everyone I spoke to pities the so-called ‘Amba Boys’ (separatist fighters) and views them as young men caught up in a senseless movement of violence, that no one wants to be associated with.

Our first day in the office however provided a very real reminder of life for people living in more rural areas, when I was told of one staff member being forced to barricade herself in her home over the weekend as separatists had tried to break down her door with machetes. One member of the NOWEFOR board arrived late to our meeting because separatists had blocked the only road into Bamenda, preventing anyone from going in or out of her community. Everyone I met had a story to tell; everyone has been affected in some way, but I was amazed at how stoically they spoke about such a terrible situation that does not even bare thinking about for most of us.

I was keen to meet people involved in our on-going project, EU funded Bridging the Gap. Together with MBOSCUDA, I visited Akum, around an hour south of Bamenda, which was formally a farmer-grazer conflict hot-spot. There I met the Water Management Committee and some Dialogue Platform members who explained their role in the respective structures, why they wanted to be involved and the impact they see the committees and platforms having on the community. All the participants were so engaged with conflict resolution and mediation and the passionate way in which they described the importance of such structures was enough to convince even the most sceptical person about the impact of development interventions. I was so impressed with the personal responsibility each person felt they had in preventing farmer-grazer conflict and the commitment to finding peaceful solutions when conflict does arise. In Akum, most incidents of conflict used to occur because of conflict over scarce water, but through the Water Peace for Akum project (funded by The Drinking Fountain Association, Big Give, Wateloo Foundation, WF Southall Trust and Village Aid donations), Akum now has a functioning water point, owned and maintained by the committee, which provides water in abundance to multiple communities across area. 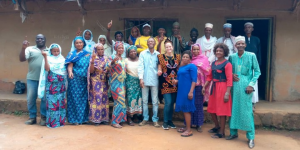 “We are one” – Akum Water Management Committee and Dialogue Platform made up of Mbororo pastoralists and non-Mbororo farmers. I received an overwhelmingly warm welcome that was topped off with being presented with a Toghu, an elaborately embroidered velvet dress traditionally adorned by North Westerners.

Later in the week I attended training for Mbororo community leaders on effective representation in decision making spheres, primarily made up of internally displaced Mbororos who had been forced to relocate to the West region in search of safety. This was an excellent opportunity to hear their stories which the UP and Village Aid teams will be making available shortly. What is remarkable is that in communities where peace building initiatives have already been implemented, either through our current project (EU funded Bridging the Gap) or previous projects (see below), the socio-political conflict is actually strengthening social cohesion between Mbororo pastoralists and non-Mbororo farmers because communities have seen the devastation that violence and insecurity has had on their lives, which has in turn made them realise the senseless nature of conflict amongst themselves.

The long lasting effects of In Search of Common Ground (ISCG) and Water Peace for Akum are clear to see. Funded by Big Lottery Fund, ISCG aimed to reduce farmer-grazer conflict by building the community’s capacity to better manage natural resources, and implemented innovative conflict resolution methods such as alliance farming (pairing a farmer and grazer together to maximise the use of land, manure and crop residues), biogas (turning cow manure into biogas to provide gas heated stoves to farmer and grazer households), and dialogue platforms (community-based conflict resolution and mediation groups). Dialogue platforms continue regularly; it is highly likely that the enthusiasm for dialogue platforms in Akum is representative of most, if not all of the other existing dialogue platforms. I was even told of communities that had formed their own, without the training provided as part of ISCG, because they had seen the positive impact in other villages.

Most strikingly though, dialogue platforms are serving another crucial purpose now. The training that members have received on negotiation and mediation is being used to, in one instance that I was told about, negotiate the terms of release with separatists who had kidnapped a community member. One man told me that members of the community had joined forces to seize weapons from the rebels, and had entrusted them to the dialogue platform to prevent them from falling into the wrong hands. Dialogue platforms are seen as community guardians, who are so trusted and respected that they now called upon to resolve conflicts outside of farmer-grazer related issues. In the absence of protection from the forces of law and order, communities look to these havens of peace amongst the conflict as an essential support network.

I was so inspired by the commitment of everyone I spoke to, to promoting social cohesion amongst farmers and grazers. This type of conflict affects people the world over, but Mbororos and non Mbororos in the North West are setting an excellent example that I can only hope others will follow.

Brought to you by Programme Support Officer, Carmel Moran 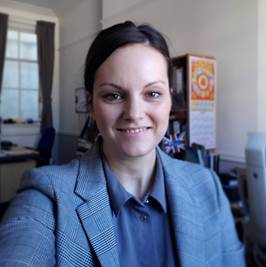 PREVIOUSPart II: The Conflict in Cameroon: Responding to a Crisis
BACK TO BLOG