An update from Liv Sawyer: International Programmes Co-coordinator and Programme Manager for United Purpose, who manage Village Aid’s ‘In Search of Common Ground’ project in Cameroon.

In our mission to combat poverty and inequality, Village Aid works ‘with’ and not ‘for’ communities in order to put them at the centre of their own development. In a world where 10% of the population hold 85% of the world’s wealth, shifting power back into the hands of communities is fundamental. This will only be achieved by working with communities to generate locally owned actions.  It is in communities where men, women and young people build relationships, assert their rights and mobilise action to achieve aspirations.

During my visit to the North West region of Cameroon in December, I saw what happens when a community is left behind; a community of people who feel they live in a country where their voices are worth less than those in neighbouring regions and a community whose power is diminished by a narrow elite.

Our work in Cameroon is focused in the North West region – one of two Anglophone (English-speaking) regions in Cameroon – the other being the South West Region, both bordering with Nigeria. In 1961 Cameroon was unified, previously the French ruled in the East and the English ruled in the West.  As a consequence, the North West and South West regions face what is referred to as “the Anglophone problem”: a socio-political issue rooted in Cameroon’s dual colonial legacies.  This has culminated in underinvestment in the communities in these regions, underrepresentation in leadership roles across all sectors and the alleged erosion of Anglophone institutions e.g. common law and education. In November, strikes against the enforcement of francophone institutions on the North West and South West regions escalated into protests and police brutality.

In Search of Common Ground

‘In Search of Common Ground’ is enabling communities to take back power in addressing conflict over land and water with the support of our long-standing partner MBOSCUDA. Instead of navigating a legal system which is already biased against their interests, crop farmers and cattle herders are put at the heart of locally-based alternate conflict resolution forums. These approaches, which include Dialogue Platforms and the implementation of Management Committees to protect common resources, are having a wide and positive influence.  During my visit in December, I spoke with Amina Adamu, a member of Baba II Water Management Committee and Dialogue Platform, who reported; “MBOSCUDA has helped my voice be heard”. 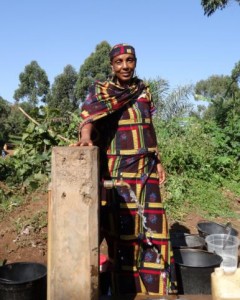 2016 marked our midterm evaluation of the project. Key findings include a 10% reduction in the incidence of conflict between farmers and cattle herders in the communities where we work, with conflict over water being halved. Importantly people said that conflict has reduced (77% compared to 32% in 2013) and that conflict was less severe than it had been (79% compared with 37% in 2013). We also found that 13 Dialogue Platforms have emerged in communities not initially targeted by the project – an encouraging indication that communities have bought into the alternative conflict management approach.

These are promising findings after just two and a half years of project implementation, and point both to the importance of addressing imbalances of power and to the preference of the community-led approach by communities.

Find out more about this project here.

PREVIOUS25 Years of Village Aid: Chatsworth celebrations
BACK TO BLOG

NEXTWhere there’s a will, there’s a way... to fulfill your wishes when you're gone!